A Question of Loyalty (Four Stars) 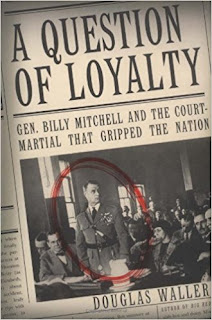 An interesting book that puts the circumstances surrounding General Billy Mitchell's court-martial into perspective. Mitchell, a latecomer to military aviation but one of its strongest proponents, had made his name during the Great War as the combat leader of the United States Air Service in France. He was not its chief. When he returned to the United States he was made Deputy Chief of the Air service and worked with the Navy to prove that land-based aircraft (bombers) could destroy battleships during a demonstration off the Virginia coast. He was not its chief. He appealed directly to the American people for an opportunity to show what airpower could do by pushing for an air force co-equal with the Army and the Navy. He used newspaper articles and books to spread his ideas about airpower. For his troubles he was sent out to Fort Sam Houston, Texas.
When the Navy suffered two aviation fiascos in one week (the destruction of the airship Shenandoah and the disappearance of a Navy amphibian trying to reach Hawaii nonstop from the West Coast) Mitchell could not help himself: he wrote a press release accusing the government, the Navy and the Army of frittering away the lives of pilots because they were ignorant of the needs and potential of airpower.

In doing so, Mitchell made many enemies (including the president).

A good book, although the way it jumps forward and backward in time is a little hard to track at times. The author clearly has some research behind the material he uses. It also includes some helpful photos.
Posted by Doc Crabtree at 6:26 PM No comments:

I review almost exclusively history books (with rare exceptions). I will gladly review any book having to do with antiaircraft or air defense. Get in touch with me for more information. Most of my book reviews are also on Goodreads and Amazon.
Posted by Doc Crabtree at 5:58 PM No comments: 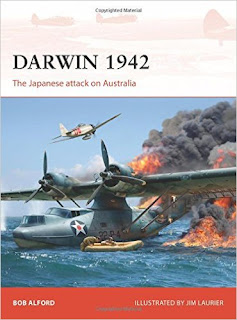 Not well known in the United States, the February 19th, 1942 Darwin Raid saw the Allies once again taken by surprise by the Japanese. This book is one of the few that really looks at the topic.

While the author clearly knows the topic, the emphasis seems to be a bit off in this Osprey book, which is part of a series that focuses on specific campaigns. While the author does provide background (the "road to war" type info) he seems to be more obsessed with the U.S. Army Air Corps unit which just happened to be at Darwin during the raid, the P-40s of the 33rd Pursuit Squadron. This unfortunate unit, just formed using pilots who had no combat experience and didn't know each other, did not last long at the hands of the veteran pilots of the Imperial Japanese Navy. While this is an important story, does it warrant describing the circumstances of each pilot's shootdown? Does it make any sense to map where every single P-40 went down? And is it necessary to discuss the motivations of one of the pilots involved in the melee?

As I said, the author obviously knows the topic, as evidenced by map produced showing the attack patterns of the various Japanese elements. But little is said about the antiaircraft artillery present other than a few impressions here and there. Did the guns lack experienced crews? Did they not have ancillary equipment such as predictors? Were any of the zeros dedicated to suppressing the flak? None of this is looked at.

Posted by Doc Crabtree at 5:57 PM No comments: 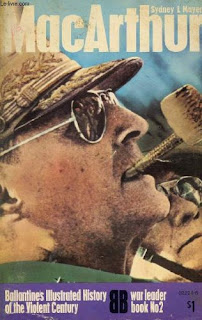 One of the Ballantine illustrated paperbacks of WWII, this volumes packs a lot of information, photos and maps  good information about General MacArthur's prior to WWII, such as his role in the Philippines following the Spanish-American War, the fighting he did during WWI with the AEF, his role in the Billy Mitchell court martial and in suppressing the Bonus March... a lot of material. In fact, this book does an admirable job in telling the story of a man whose life touched so many episodes of the American saga. It does not include a discussion of his role in reconstructing Japan or as Supreme Commander in Korea, but as I understand it, this is covered in a second book in this series.
Posted by Doc Crabtree at 8:40 PM No comments: