I review almost exclusively history books (with rare exceptions). I will eagerly review any book having to do with antiaircraft or air defense. I am also interested in books on Africa, but again, mostly the history of the continent, especially in the 20th Century. Get in touch with me for more information. Most of my book reviews are also on Goodreads and Amazon.
Posted by Doc Crabtree at 11:18 AM No comments: 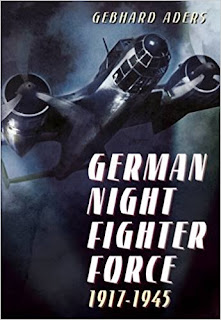 From 1940 on Germany faced the wrath of the RAF bomber command, which chose to conduct its raids on German cities at night. In response, the Luftwaffe not only increased the number of ground-based antiaircraft units but also formed dedicated night-fighter squadrons. Mr. Aders discusses the evolution of the force, from its reliance on sound detectors and searchlights to the employment of dedicated and purpose-built (sort of) fighters which could detect bomber streams and target individual enemy aircraft in the dark.


Aders book starts with World War One, which saw primitive aircraft attempting to intercept small-scale bomb raids at night. Prior to World War Two very little thought was put towards night fighting and when the Luftwaffe was created the emphasis was on attack, not defense. However, RAF bomber raids demanded a response and German fighter pilots were trained for the first time to fly on instruments only. From there, the history of the German night fighter force was largely one of improvisition and necessity. The Me110 was the first fighter to be relegated to the night fighter role after its disappointing performance during the Blitz. From then on the night fighter force usually employed obsolescent airframes, which, if they were lucky, had been somewhat modified for their new role. Superior aircraft designs were on the drawing board but with so many aircraft which could be used for night fighting (although not optimally) just sitting in storage or factories the Reich would not divert the resources from its limited manufacturing base for truly superior planes.


Aders clearly knows the topic. His book discusses personalities who were involved in the design of Germany's air defenses, such as General Kammhuber. His book looks at the various aircraft adopted for use as night fighters, such as the Me110, the Ju-88, the He219 and the Ar240, as well as the drawbacks to designs put forward due to lack of available engines, etc. He discusses ground-based radars such as Freya and Wurzburg and the roles they played in early warning and guidance of the fighters. He also looks at Lichtenstein and other airborne radars for targing individual enemy aircraft, not to mention efforts to use infra-red targetting. Aders' book includes discussions of individual night fighter pilots and operations of night fighters outside of the Reich.


Reading this book you will be surprised at how the defenses that threatened the RAF were hobbled together. It will make you wonder how much greater the damage might have been if the Germans had changed their priorities, even temporarily. You would be hard-pressed to find another book as good as this one on the topic of German night fighters. I found myself skipping over technical details at times but I know where to find those details if I need them. Lavishly illustrated with black-and-white photographs, maps and organizational information.

Posted by Doc Crabtree at 11:18 AM No comments: