Information Warfare is a very real thing and the People's Republic of China are one of the biggest proponents of this type of military endeavor. Thomas has looked at the writings of the Chinese establishment available to the West and has provided an assessment of the way China intents to fight on the information battlefield... indeed, how they have already fought. The emphasis of Information Warfare as seen by the Chinese is different than the U.S. approach to this type of struggle. China sees IW not as a means of gaining information "superiority" or "supremacy" but as a means of gaining control... of making THEIR objectives the objectives of their enemies. Information Warfare to the Chinese means propaganda, network attacks, "information frontiers," and the development of special "information-based" weaponry. China takes IW seriously enough to adapt it to their concept of People's War and to create not just active IW units but a comparatively large reserve force as well.

Unfortunately, I believe that whoever laid out the book and edited it let the author down. I think they layout could have been done more efficiently to aid in the flow of the book and some editing might have made this a more readable product. Also, the book only looks at events up to 2004... a more up-to-date book could eliminate some of the issues with this one.
Posted by Doc Crabtree at 10:15 AM No comments: 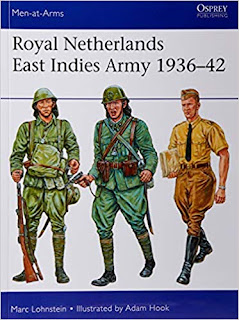 In the 1940s the Netherlands East Indies was in transition: its military was moving from a colonial policing unit to an army which could defend itself from outside aggression. In view of the rise of the dictators and their thirst for natural resources to power their war machines this was not an unsound policy. The Netherlands planned an army which could defend the islands of Indonesia with varying layers of military power, from local defense forces armed to repel an attack or at least to pin it down, to modern military units equipped to move rapidly to push invaders to the sea. However, by the end of the 1930s this transition was incomplete and in 1940 and 1941 full scale global war made it extremely difficult to get the weapons already planned for the Army.  As a result, a well-planned Army was in the middle of transition, units which had already been organized now had many men who did not know each other and while the Dutch had some good, modern weapons they did not have men who were really familiar with them. Also, it seemed that the Dutch had know concrete plan to repel invaders from islands other than Java.

If only the Japanese had waited another year, until Allied forces could possibly assist the Dutch in creating their modern army, then they might have given a good accounting of themselves. But time was not on the side of the Dutch.

Well-written, great illustrations, maps and original artwork.
Posted by Doc Crabtree at 6:53 AM No comments:

Trench: A History of Trench Warfare on the Western Front (Five Stars) 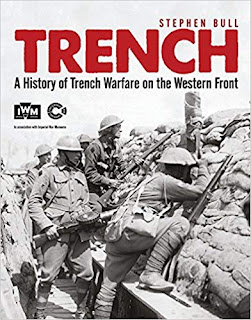 The common view of trench warfare on the Western Front is 2-dimensional: men stuck knee-deep in muddy ditches for months at a time, never venturing out unless wounded in an artillery or gas attack OR until the time comes to go "over the top."

Bull does a better job of it. Yes indeed, there were ditches that were knee-deep in mud but there were also pumps and "above ground" trenches. And soldiers were not kept packed in trenches, since this would foolishly expose them to enemy artillery and sink morale; soldiers were rotated from the forward trenches to rear positions. Yes, there were artillery barrages that could last for days but there were also concrete bunkers and deep tunnels. Yes, there was gas but primitive countermeasures were invented right away and effective protective masks and clothing universally distributed within a few years; in any case, gas casualties only represented a fraction of the overall casualties on the Western Front. And finally, going over the top in mass attacks became rarer as time went by and new, specialized tactics making use of portable machine guns and other close support weapons came close to breaking the tyranny of the trenches.

Well-written and lavishly illustrated, Trench makes use of period drawings, photographs and some of Osprey's artwork to give a better idea what fighting was like on the Western Front.  If you are reading a history of the war read this first as it will be an eye-opener.
Posted by Doc Crabtree at 6:39 AM No comments: 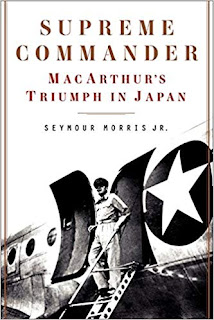 Following the defeat of the Japanese Empire there seemed to be only one choice to head up the occupation of the Home Islands: General MacArthur. And not only did he take charge he succeeded where many thought the occupation would wind up with die-hard militarists fighting from the mountains or the Communists coming above ground to claim Japan for their own... with a little help from the Russians. Instead, MacArthur not only took control of Japan but reformed it and rapidly put its economy back on its feet. The things MacArthur thought were important, such as women's rights, land reform and labor unions, were important to the transformation of Japan from a defeated enemy to a vigorous friend.

Mr. Morris's writing does a good job of telling this story, although it is a little redundant in a couple of places. One of the things I really enjoyed about the book was that the book acknowledged that MacArthur was a bit of a megalomaniac but it also points out that he was a very CAPABLE megalomaniac.  Also, Morris discusses the organization of the SCAP and took note of how important MacArthur's staff was, both those at the highest levels of the the organization and those junior officers who occasionally had brilliant flashes of insight or accepted positions far above their pay grade because they were at the right time at the right place doing a job that had to be done. An excellent book.
Posted by Doc Crabtree at 10:11 AM No comments:


I review almost exclusively history books (with rare exceptions). I will eagerly review any book having to do with antiaircraft or air defense. I am also interested in books on Africa, but again, mostly the history of the continent, especially in the 20th Century. Get in touch with me for more information. Most of my book reviews are also on Goodreads and Amazon.
Posted by Doc Crabtree at 12:16 PM No comments: 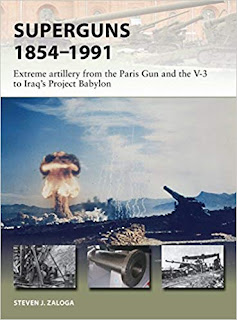 Zaloga's work on the biggest of the big guns (minus railroad guns) is a fascinating study that goes from the big smooth-bore cannons forged in the last half of the 19th century to Dr. Bull's Big Babylon, a gun which would have dwarfed previous guns in range and capability if it had been completed. Superguns provides photos and artwork of these behemoths, discussing range and, often, the specific purpose of the few copies built. For instance, the Paris Gun was fielded knowing that the three completed weapons could not hope to provide the concentrated power necessary to devastate the French capital and its accuracy rapidly declined but by hitting Paris with artillery the Germans were demonstrating that they were possibly close enough to capture it. The weapon was a failure both as an artillery piece and as a terror weapon. Atomic cannons (both US and Soviet) gave the ground forces the means to hit the enemy with tactical nukes but were cumbersome because of the size of the nuclear weapons available in the 1950s... eventually they would be replaced by rockets and other weapons. And Saddam's Supergun, the Big Babylon, would have been able to deliver explosives (or possibly chemicals) against a distant target... but the necessity of constructing it on a hillside made it very vulnerable to air attack.

Very well illustrated with original artwork, line drawings and photographs. It could have used a few maps but it is well-written and provides the reader with other sources to get detailed information on the weapons discussed.

Posted by Doc Crabtree at 12:15 PM No comments: