During the Second World War the British were fighting for their very survival, and as a result all the resources of the Empire were brought to bear. The British Empire was particularly keen on holding on to Persian Gulf oil.

Although only a footnote at best in most histories, this forgotten front saw intrigue, daring bluffs on the part of the British and strategic overeach on the part of the Axis. With manpower requirements running high, the last thing the British wanted to do was to get into a war in Iraq, but when a coup was staged that briefly brought in a pro-Axis government the British had no choice but to act decisively. Troops from India, armored vehicles from Palestine and RAF aircraft from North Africa rapidly took on the military clique known as the Golden Square and defeated them and the small contingent of Luftwaffe aircraft sent in to help them.

Britain had watched the USSR, anticipating a new front which would see the Soviets invading Iran and possibly Iraq at the behest of their Axis ally. That all turned around after Hitler launched his invasion of the USSR and as a result the Soviets and the British jointly invaded the country in order to open a supply line for the Red Army from the Persian Gulf to the Caucasus... and for the first time the United States became involved in the Middle East in a big way.

This book tells the whole story of the region during WWII and the steps taken to defeat the wavering countries of Iraq and Iran and to provide war material to the Soviets... not to mention how the Polish victims of Stalin's 1939 invasion were freed in Iran and allowed to fight on the side of the Western Allies. Not just are the politics of the war discussed but also the impact that it had on the British, Soviet, American and Polish soldiers who came there... not to mention the difficulties that Allied occupation brought on the Arabs and Persians who lived there.

Well-written; includes a map and many excellent black-and-white photographs.

Posted by Doc Crabtree at 10:31 AM No comments:

The End and the Myth (TLOW) (Four Stars) 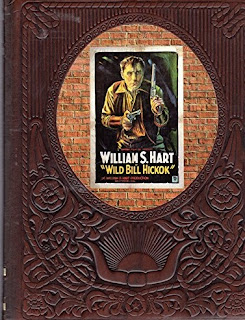 One of the Time-Life Old West series, this volume looks at the passing of the wild west, or rather how it went from a way of frontier life to a part of the American story, a part which is part of our culture as it has become a piece of what we are. As the west became settled and the territories became states, the Old West was represented in dime novels, in live-action wild west shows, in movies, and in television shows. The cowboy of old became the rodeo performer, the tough frontier soldier was revived in the form of Teddy Roosevelt's Rough Riders, and the rowdiness of the old mining camp gave way to the towns of the oil boom. In this way the Old West has forever become a cornerstone of America.
Posted by Doc Crabtree at 10:26 AM No comments:

I review almost exclusively history books (with rare exceptions). I will eagerly review any book having to do with antiaircraft or air defense. I am also interested in books on Africa, but again, mostly the history of the continent, especially in the 20th Century. Get in touch with me for more information. Most of my book reviews are also on Goodreads and Amazon.
Posted by Doc Crabtree at 7:06 AM No comments:

The Life of Johnny Reb: The Common Soldier of the Confederacy (Five Stars)

This military classic looks at the ordinary soldier in the Confederate States Army: how he ate, his punishments, how often he got leave, his attitudes towards his officers, what he fought for, his morale, his weapons, so on and so. The author used primary sources and names the soldiers (when possible) who provided insights into the life of "Johnny Reb." I originally read this book almost 30 years ago and discovered that many of my assumptions about Confederate soldiers are, in fact, based upon what I learned from this book. It provides an excellent cornerstone for any real scholar of the Civil War.

Posted by Doc Crabtree at 7:05 AM No comments: 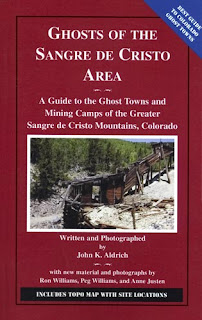 If you want to see old ghost towns of this region this is probably the book you want. The newest edition has coordinates. Covers everything from towns that are shadow of their former selves (Silver Cliff) to towns that have left almost no trace (Rosita) to all the shades in between. During recent travels we went to several of these and found the descriptions to be pretty accurate. Includes and folded, seperate map.
Posted by Doc Crabtree at 6:48 AM No comments: 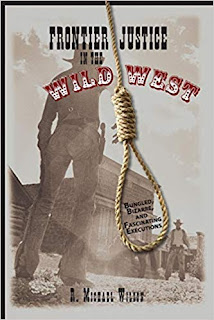 R.M. Wilson has collected stories about the way justice was dispensed in the old west, back when lawmen were few and far between and and the process of a legal trial slow and frustrating. Murderers often found themselves at the end of a rope, with or without due process. The stories collected here cover the typical as well as the unusual. Well worth a read.Illustrated with B&W photos and a map.
Posted by Doc Crabtree at 6:30 AM No comments: